Charles Dera walks into this 4 o’clock appointment and is greeted by trickster Jay Taylor. She doesn’t work there but wants to have some fun. She lies to Charles, telling him that she can service him. When they go upstairs, he notices that she’s not taking off her clothes. When he exclaims that his dick isn’t going to wash itself, she plays dumb and starts undressing immediately. They enter the shower together and not a moment passes before he starts barking orders at her. While on her knees, she massages his legs and ass; he turns around and practically slaps her face with his dick. While she admires it, Charles instructs her to play with his dick and balls. While Jay talks and mumbles out of nervousness, Charles knows exactly how to shut her up. He grabs her pussy and starts playing with it, making her cum almost immediately. They exit the shower and he lies down on the mat. She applies some Nuru gel on her hands and starts massaging his dick. He grabs her neck, starts kissing her and then tells her to suck his dick. She licks it up and down as he face fucks her. She deepthroats it as she chokes on his big cock. Charles then asks Jay to sit on his face as he begins to devour her pussy. They 69, and then Charles asks her to spread the gel all over her tits. As she does this, she grinds her pussy on his dick and it isn’t before long that she puts it inside her and starts riding him. When he cums all over her face and mouth it looks like the new girl ain’t a newbie anymore. 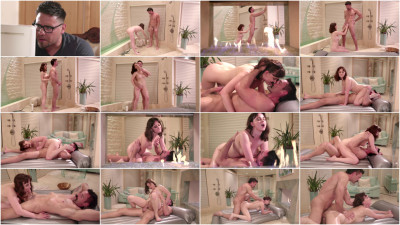