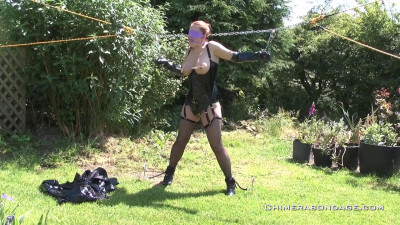 Candie enters room and asks her boyfriend to sit and watch as she has a kinky surprise for him. Candie then opens a shiny pvc box and takes out some rope, head harness, and a leather armbinder then she says to her boyfriend “I’ll need help with this later”. Candie then ties a crotch rope around herself and frog ties her legs. Candie puts the inflatable gag in her mouth that is part of the head harness and secures it in place then inflates the gag with slow presses of the bulb inflator before she lays face down on the floor for her boyfriend to help with the armbinder. Candie is not pleased as a leather belt is fastened around her waist and armbinder to secure her arms to her body before she is left to struggle for her boyfriend’s entertainment.
Candie is reading her instructions that she received from ‘The Agency’ for her first selfbondage dare. Candie decided to wear a collar with a small bell attached to the front, a black bra, white cotton shirt, a black tight latex skirt and both stockings and pantyhose now fastens a ball gag in her mouth then handcuffs her hands behind her back and leaves the room and into her garden. Candie walks across the garden, constantly checking she can not be seen until she reaches where there is a camera and a second note.
Candie types into her laptop saying “Yes that’s the program – sure it is” then secures cuffs onto her ankles and these to an electric hoist before operating her Bluetooth remote to start the program. Candie is raised into the air by her ankles then a trap door opens below her before she is lowered down through and into the room below.
Candie has setup a camera to take pictures of herself while in bondage and soaked with water for her private photo album. Candie dressed in only her pantyhose begins her selfbondage by securing leather cuffs to each ankle with a metal spreader bar between. Next she ties a white crotch rope around herself with its end tied off to her right wrist cuff via a hook above her. A long chain is already padlocked to the ceiling at one end with a posture collar to its other, this she places around her neck and padlocks in position. Candie fastens a purple gag filled with holes in her mouth then secures her wrists into leather cuffs above and to each side of her so she is spread eagle. 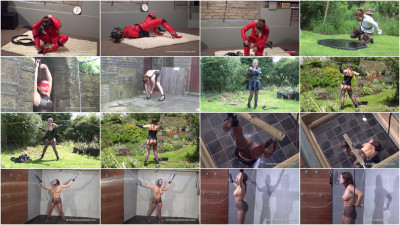